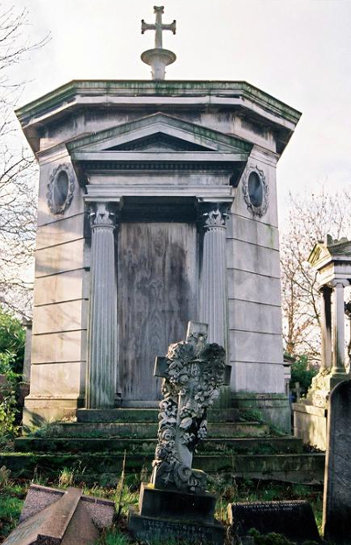 St Sophia's Greek Orthodox Cathedral has, and manages the Greek sections of the cemeteries  in West Norwood Cemetery, Hendon and Southgate.

Address of the Cemeteries 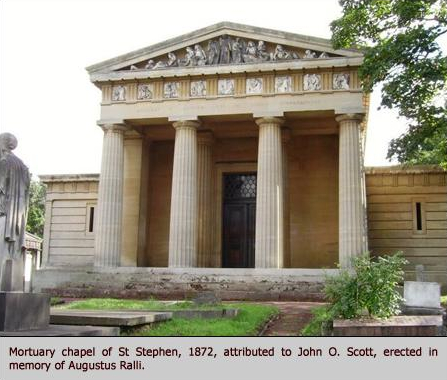 The Hellenic enclosure of West Norwood cemetery is not only an integral part of the history of the Hellenic Community of London but also of the whole Hellenic Nation.

The mortal remains of great benefactors of the newly established Hellenic State after the 1821 War of Independence lie under its Neoclassical burial monuments.

A secluded area of about half an acre was acquired in 1842 to meet the needs of the distinguished members of the Community for their last journey.

The increasing number of Hellenes setting in London, especially between 1835 and 1840, led to gradually to the consolidation of Hellenic Community. 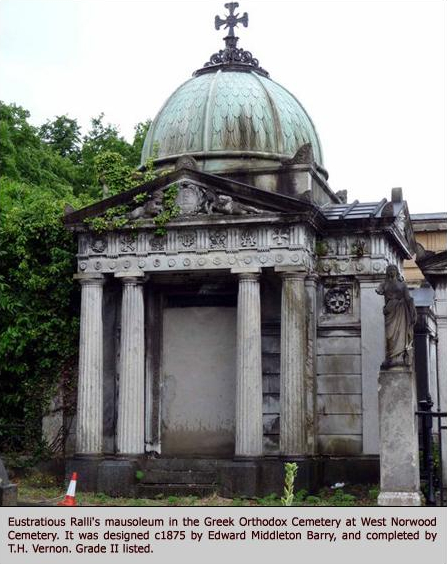 By the end of 1839, the Hellenic Community was solidly established thanks to the leading personality and influence of Pandias S. Ralli.

At the General Assembly held on 6 November 1841, the Community appointed a Committee to accomplish the difficult task of finding a suitable plot for the burials of its members.

On 2 July 1842, they reported to the General Meeting that an arrangement had been made with the South Metropolitan Cemetery Company for a special site in its West Norwood Cemetery to be allotted to serve as the Hellenic Cemetery.

The General Assembly of the Brotherhood unanimously approved to the Committee's decision and further authorised them to enclose the site of the Cemetery with railings "and empowered them to spend up to £150".

Thus by mid-1842, the Hellenic Community acquired its own cemetery.

The railings, of great artistic value, protect the enclosure and are supported at regular intervals by marble pilasters, adorned with female statues, which slightly exceed the height of the fence.

The most impressive monument in the cemetery was erected in 1872, after the tragic death of Augustus Ralli, a 16-year-old student at Eton College. 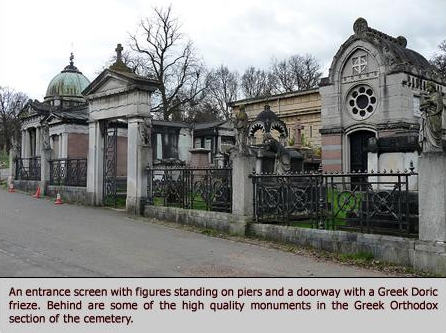 His father, Stephanos Ralli, sent a letter on 18 March 1872 to the members of the General Assembly, asking for authorization from the Brotherhood to build, at his own expense, a small chapel in memory of his son.

The General Assembly gratefully accepted this generous proposal and the churchwardens were charged to express the Community's gratitude to the donor.

The churchwardens carried out the resolution of the General Assembly and asked permission from Stephanos Ralli to dedicate the Chapel to St Stephen, "in order that the remembrance of this valued gift might remain more vivid in the minds of our descendants". 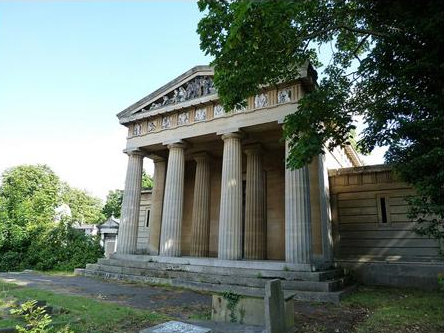 Norwood Cemetery contains the remains of renowned Hellenes who laid in many ways the foundations of modern Hellas, brought back to public awareness the Hellenic spirit, honoured their origin and won the respect of the British public.

The cathedral of St Sophia and Norwood Cemetery are reminders of the determination of the Hellenic diaspora to maintain their cultural and spiritual identity not only while in this world but in eternal life as well.

The enormous amount of work and money required to preserve this valuable source of modern Hellenic history is an outstanding debt owned to the founders of the Community by us and future generations.